Cafe24, the first company to go public under the Tesla Policy, aims to become an e-commerce platform that enables anyone in the world to conduct online business in the global market. The Tesla Policy allows promising companies to go public even if they have not yet posted significant profits. 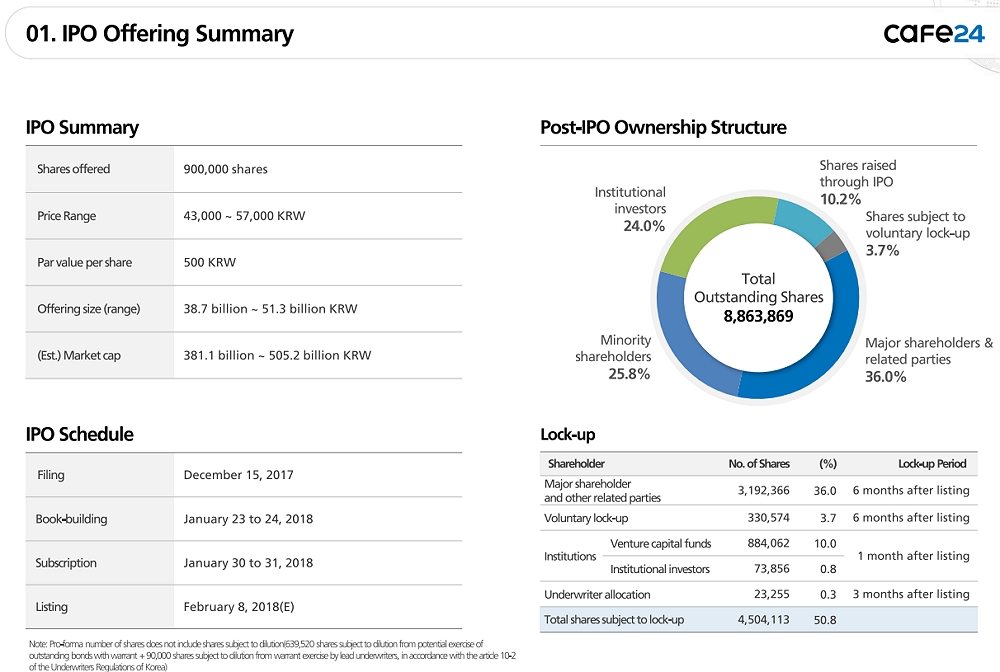 Cafe24 emphasized the company’s business model that boosts the e-commerce ecosystem containing merchants, partner companies, and other relative parties. Cafe24 explained its business model as a virtuous circle that starts with Cafe24 (1) lowering the entry barrier for entrepreneurs by offering its platform for free which (2) leads to an increase in successful DTC stores like IMVELY, 66 Girls, and HOTPING, (3) resulting in more e-commerce affiliated companies in payment, advertising, marketing, and marketplaces gathering on Cafe24’s platform – eventually contributing to further developments in relative industries. (4) Through this process, Cafe24 is able to utilize the gathered e-commerce big data as a basis for sophisticating its platform, offering new services, and expanding its business, which allows for the making of steady profit.

Founded in 1999, Cafe24 is an e-commerce platform that offers various One-Stop services needed for operating DTC stores including online-store-builder, operation, shipping, and marketing services. By simply creating an online account, a merchant can build a multi-language DTC store in seven languages including English, Korean, and Japanese. Integrated services with over 80 distinguished global companies including Google, Amazon, and Facebook enable Cafe24 to provide merchants with localized global market expansion services while contributing to boosting relative industries. The continued growth of DTC stores using Cafe24’s platform resulted in the company achieving 6.5 trillion won in Gross Merchandise Volume (GMV) (based on the securities registration statement) and the company is seeing 20% average growth per annum.

Cafe24 is a global success platform that provides a one-stop business environment for e-commerce merchants so that they can achieve continued growth by focusing on their creativity. Cafe24 has established an e-commerce ecosystem with 1.7 million Direct-to-Consumer (DTC) merchants and various global partners in areas like payment, shipping, and marketing. Cafe24 is poised for growth as more DTC brands and e-commerce participants continue to join the burgeoning industry.